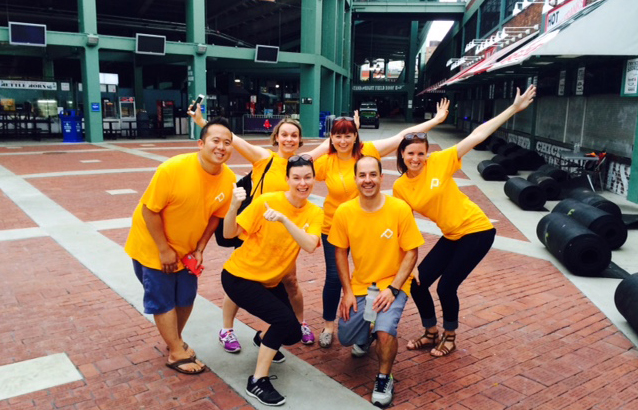 Last week the Acceleration Partners team gathered in Boston for our semi-annual company meeting. As always, our time was filled with informative sessions and much-needed catching up.

New this year, however, was a scavenger hunt that sent different-colored teams skedaddling across Boston in an attempt to photograph themselves at as many designated locations as possible.

Founder and managing director Robert Glazer was cryptic when he told team members to expect a 'great race' that would test their strategy, teamwork, and physical endurance.

Everyone donned brightly colored team T-shirts created by CustomInk and gathered on the campus of Boston University, where they received a mysterious set of clues directing them to locations around Boston. The race was on to see which team would prevail.

What ensued was an intense, hilarious, sweat-inducing amazing race across one of America's oldest cities that left the gray team victorious (congrats guys!) but everyone with some pretty awesome memories.

Check out some photos from the race below, and if this sounds like how you'd like to spend your workdays, check out our careers section and join the team!